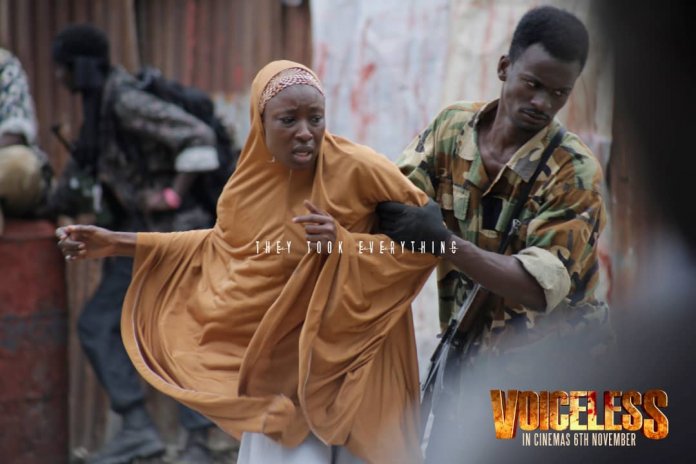 With the theme of love, betrayal and terrorism, the memory of the stolen dreams of Chibok Girls is evoked in Rogers Ofime’s new movie, ‘Voiceless’ which hits the cinemas today. The indigenous thriller interrogates life after the rescue of the abducted school girls and boys, writes Yinka Olatunbosun

Panic may be written on the faces of the young characters in the new movie, “Voiceless” but deep down in their hearts is courage. A very promising girl, Salma is captured alongside 245 schoolmates by a dare-devil terror group. The world wakes up to the chilling news of their disappearance long before a search party is launched to negotiate the return of the minors who are preparing for final exams. Nothing had prepared these young ones for the theft of their dreams. Even with the dim hope of freedom, Selma is determined to return home. A whole new world awaits her and other returnees. With a new struggle against stigma, these abductees are traumatised once more by that sense of disconnection from the society.

That much is true of the plot in ‘Voiceless,’ a rivetting movie which is set for the cinemas today. Produced by Rogers Ofime, founder, Theatrone Media Incorporated in collaboration with Whitestone pictures and Native Media, this feature-length filmin Hausa language is a romantic thriller with English subtitle.Directed by Robert Peters, the emotional story is told from all the sides. Young girls are brainwashed by religious extremists, forced into child marriage, defiled and impregnated against their will. Unfortunately, that’s the side that had earned the most media attention. The movie also gives a visual account of the young abducted boys who had been forced to carry arms and wear suicide jackets, leading to lasting mental dislocation.

With rich cinematography, bouyed by special effects crew from South Africa and United States of America, the movie-set in Jos- evoked the sense of fear of the actual events in the actors on set. For Asabe Madaki, who played the role of Salma, the anguish of reenacting these scenes of terror hit hard.

“The most challenging thing about my role is that it was an emotional role for me. Even when I got home, I was still traumatized because it is a true event and knowing that that happened to people even was traumatizing for me,” she said.

The producer, Rogers Ofime famed for popular television series such as Tinsel, Hotel Majestic, Hush, The Johnsons and full-length movies such as Secret Lives of Yahoo Boys, This House is Not for Sale, Oloibiri is a socially-conscious artist whose movies are usually inspired by true events. Whilst the dust may have settled on the issue of the Chibok Girls in news media, many of the abductees are struggling to be reintergrated to the society.

“Every film is not meant for everyone,” Ofime remarked at the press preview. “People whom the film resonates with are the ones that I made it for and they should come and see it. But the success of the film is that everyone who sees it, the film should resonate. I don’t do premiere. Let’s get the word out there that there is a film, a good story that needs to be told.”

While fielding questions on the choice of language for the movie, Ofime stressed the need for cultural preservation to make a story retain its authenticity and echo with the right audience.The movie is a propaganda tool aimed at mobilising the viewer into action to help victims of insurgency.

“The fact that I don’t live in the north does not mean I cannot help to rehabilitate these people and if one sees this movie, we would be able to play our part,” he said.

With six months of scripting, one year of pre-production, sixty days of filming and one year of post production, movie buffs would be thrilled to see the efforts at achieving verisimilitude with reality.

“The most challenging part is that our investor pulled out a week to production so doing the movie was a miracle,” he added.

The Nigerian Doctor (In Development)