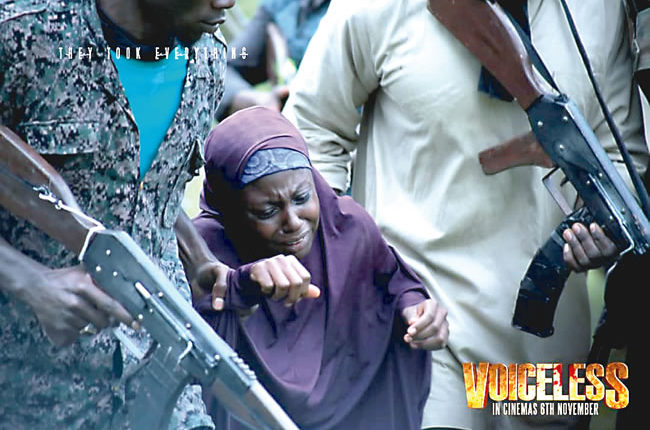 Producer Rogers Ofime’s ‘Voiceless’ explores the plight of male Boko Haram abductees and the difficulty of re-integrating them and female victims back into the society in this movie of love, betrayal and violence.

ON April 14, 2014, Boko Haram militants attacked Government Secondary School, Chibok, Borno State and abducted about 276 schoolgirls. Nigerians and the world were taken aback by the brazen abduction that later sparked one of the biggest global social media campaigns, #BringBackOurGirls.

The militants’ action, shattered lives and destroyed families with majority yet to recover. Producer, Rogers Ofime’s Native Media, which prides itself “as a TV production company setting new standards on content creation for a dynamic TV audience,” has excerpted from that heart-wrenching incident for ‘Voiceless’, a Hausa language feature film that will open at Nigerian cinemas on Friday, November 20.

Directed by Robert Peters and starring Esther Asabe Phillips, Adam Garba, Rekiya Attah, Sani Muazu, Uzee Usman and Yakubu Mohammed, the movie centres on Salma (Philips) and Goni (Garba), who were captured by the militants. While one is a skilled mechanic forced to work for the insurgents, the other was abducted alongside other girls and made to satiate the lust of the militants.

Brought together by adversity in the abductor’s camp, they find love, strength and the will to escape back to the life they were taken away from. But it’s a different story when they get home. While Mama Salma (Attah) is overjoyed to get her daughter back, even with an addition, Baba Salma (Muazu) can’t bring himself to accept the fact that his innocent daughter has become a mother.

Sadly, the lovebirds who had dreamt of a ‘happily ever after’ following their escape from the insurgents’ camp face another battle: the acceptance of their love and marriage by Salma’s parents.

Meanwhile, it’s betrayal season among the insurgents. Unknown to their leader, Lafiya (Mohammed) who is totally against girl-child education, his second-in-command, Banza (Usman) is eyeing his post. Will he succeed? And will the lovebirds overcome the resistance to their relationship? What happened to the other abducted girls? The taste of the pudding is in the eating. The answers would be found by seeing this Hausa-language movie well sub-titled in English and with excellent special effects.

It is heart-rending watching the girls’ sufferings in the insurgents’ camp. One also pities Baba Salma, the no-nonsense father who tries all his best to get his child back from captivity, only for her to return with a child. It’s a serious war he fights as he struggles to accept his sad reality.   For all concerned, its pain, hurt, anguish and tears with everyone left voiceless by the mindless violence.

Ofime, who had earlier made ‘Oloibiri’ featuring Richard Mofe Damijo and Olu Jacobs among others, also explores the plight of male Boko Haram abductees and the difficulty of re-integrating them in this movie.

Speaking on this and her role after a press preview of the movie, Phillips said people should never overlook the plight of male abductees. “The boys were victims too because some of them were forced to do what they did. The society should accept them and show them love.  My role was emotional. When I got home, I was still traumatized because it is a true event. Knowing it happened to people made it more traumatizing for me. When I got home, I told my family how I was feeling and they kept talking to me that some of the girls had been rescued. That some were abroad and had a life while some were dead. I had to pray to God to take it all away, and gradually it went away. Sometimes I played music and danced; I did things that made me happy so I took out all the sadness from me. This is not my first role but I’m new in the game and I believe my future in acting will be beautiful.”

Also commenting on the stigmatisation of the male abductees and the difficulty of reintegration, Ofime said: “It’s a fact that the boys are being stigmatized, not just the girls. There is no structure for their re-integration into the system and we don’t talk about these things. So, we wanted to make a movie where people can look beyond the Chibok girls’ abduction to what happened after. We wanted to tell people that is also important that we must find a way to integrate them back into society. There could be a lawyer, there could be a doctor among them, so that was the inspiration.”

On why he made the film and the choice of Hausa language, the producer said: “The fact that I don’t live in the North does not mean I cannot help to rehabilitate victims of Boko Haram insurgents.  It’s a way of rehabilitating people in whatever way we can. We made the film because we believe the message will resonate more if it is done in the indigenous language. The story is too strong for us to do it in the English language. If it had happened in Western Nigeria, we would have done it in the Yoruba language. The actors also enhanced the movie because they spoke in their native tongues; it was believable. If we, I mean filmmakers, start to tell our stories in the languages that they belong, that story will resonate better.”

‘Voiceless’, Ofime continued, “took six months of scripting, one year of pre-production, 60 days of filming and one year of post-production. It was shot in Jos. The most challenging part is that our investor pulled out a week to production so doing the movie was a miracle.”

The Nigerian Doctor (In Development)

In Cinemas: Voiceless is more than a creative adaptation of Boko Haram’s insurgency